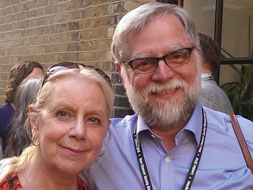 “Our eight annuities begin paying us at different points after we retire. Each time it’ll be like getting a raise.” —Martin Camargo

Sandy and Martin (Ph.D. ’78) Camargo established their first deferred gift annuity (DGA) in 2009. Their main motivation was to secure additional income in retirement. “The added benefit of lowering our income taxes was a pleasant surprise,” says Sandy.

The DGA is essentially the same as the ever-popular charitable gift annuity (CGA). However, for donors in their “peak” earnings years, the immediate income of a CGA doesn’t make sense; but they benefit greatly from current deductions (assuming they itemize deductions).

The DGA is also used to help loved ones, usually after the donor has died. One donor established a DGA for his granddaughter and deferred payments to start when she would be retiring. The result: he received a significant immediate tax deduction, and his granddaughter will receive lifetime annual payments in retirement of $32,000. This is 32% of his $100,000 contribution! The donor was thrilled to be able to do this for his granddaughter.

Since 2009, Sandy and Martin have established seven more DGAs. “Our eight annuities begin paying us at different points after we retire. Each time it’ll be like getting a raise,” Martin concludes. The couple is not alone, as more and more financially savvy donors are using the DGA to lower their current taxes and increase their future income.

Martin attended Princeton University for undergraduate studies and obtained his Ph.D. in English from Illinois in 1978. Sandy received a B.A. from Queens College and completed her Ph.D. in 2000 at the University of Missouri, Columbia. The couple met at Missouri and were married in 1987.

They arrived at Illinois in 2003, where Martin has served as head of the English Department and is currently associate dean for Humanities and Interdisciplinary Programs. Sandy is also in the Department of English and is an expert and senior lecturer in film studies. The couple feels so strongly about Illinois and the value of higher education, generally, that they have also made the English Department the primary beneficiary of their estate.