A Fierce Commitment to Education 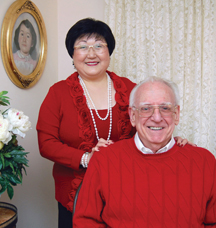 Elizabeth Denniss lived in Japan until she was eight. Her mother had married an American soldier and left her in the care of her grandparents in Yokohama. When her grandmother became ill, Elizabeth came to the United States to join her mother.

In the move, Elizabeth retained at least one element of her Asian heritage: a fierce commitment to education.

“Education,” Elizabeth says, “is very important in Japan, and families make sure that children are aware of how important it is.”

Reflecting this commitment, Elizabeth has collected an impressive list of degrees: an L.P.N. earned in Michigan at Lake Superior State College, an R.N. at Lincoln Land Community College, a Bachelor of Science in Nursing at UIS (then Sangamon State) and two master’s degrees from U of I Chicago’s nursing program in Peoria — one in Community Health Nursing and another in the Family Nurse Practitioner program.

Her husband, Herb, also values education. A retired Springfield policeman who rose to the rank of assistant deputy chief, Herb says, “I would tell young people anywhere to get an education. I always felt short-sheeted because I didn’t go to college.”

Elizabeth fulfilled her long-held dream of teaching at the SIU medical school and recently retired as a Family Nurse Practitioner in the Emergency Department at St. John’s Hospital, Springfield.

Because Elizabeth and Herb have no children, when it came time to plan their will they included a charitable bequest for UIS in support of Japanese studies. The Dennisses especially want to help students afford to study abroad in Japan.

The Dennisses have also bequeathed their collection of Hakata dolls, which are clay figurines that depict Japanese life. Elizabeth hopes the dolls will introduce students to traditional Japanese Art.

“The Japanese and American cultures are so different,” she says, “and I would like students to see the differences but also know that we are actually very similar as human beings in so many ways.”