“We know a good thing when we see it” —Don Zellar 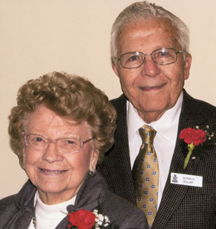 Don and Ruth Zellar may be familiar to some of our readers. Back in 2007, we featured them after they established their eighth charitable gift annuity (CGA). At the time, the couple commented on being surprised that more retirees who want to help the U of I don’t use CGAs to do so. Well, the U of I Foundation is pleased to report that CGAs have gained in popularity since then and, in fact, with interest rates at or near zero percent, more donors than ever are taking advantage of the high rates that CGAs offer.

The Zellars established their very first CGA in 1997. “Our time at Illinois is among the best years of our lives, and we cherish our memories from those days,” says Ruth.

Since their days at Illinois, where they met on a blind date in 1941, a lot has happened in the couple’s lives. After spending two years at the U of I, Don enlisted in the Air Force in 1942 to serve his country. He was a B-17 bomber radio operator and flew 35 missions before returning to his sweetheart and marrying Ruth (Thomason) in 1945. He then spent the next 30 years building a successful business career, retiring in 1975 from Bob Evans Farms as vice president of operations.

Don’s business acumen comes through in his evaluation of the CGA. “We keep doing them because we want to give back to Illinois, but from a practical standpoint, the rate of income we receive is seven or eight times higher than that which the bank or T-bills are paying, plus much of the payment we receive is tax-free. Add to that the immediate income-tax savings from the deduction we get and it really is compelling. It’s like giving and receiving at the same time, which is why we have 12 of them now,” he exclaims.

The income is guaranteed for both of their lifetimes. After that, the proceeds from the CGAs will fund the Ruth I. Zellar Endowment. Once funded, the endowment will distribute income year after year in perpetuity to support educational programs in English and American Literature. “Illinois holds a special place in our hearts and this is our way of giving something back for everything we received. I really hope others, like us, will consider doing the same,” Ruth concludes.

Today the Zellars live in Sun City Hilton Head, South Carolina. With two married children, three grandchildren (two of whom are married and the third getting married this October) and three great grandchildren, most of their time is spent with family activities, which they cherish most of all.