Jack Dolan: Stepping Up for Others 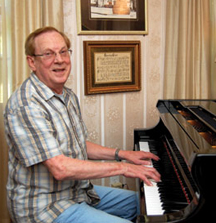 When Jack Dolan was young, he spent time in a hospital recuperating from rheumatic fever. Perhaps because of this experience, he decided at an early age that he wanted to work in a hospital and more specifically in an operating room as an anesthetist.

Unfortunately, when the time came to pursue his dream, a college degree seemed impossible. “My father and stepmother made it clear that they would not be able to help me,” says Jack, whose birth mother died when he was born.

His sister Jean, however, stepped up for Jack. “She told me, ‘You’re going to school if it’s the last thing I do,’’’ Jack says. Jean was a secretary at the time, earning about $20 a week, but she wouldn’t listen to objections. With the additional help of a good friend, Jack graduated from nursing school in 1957. After a year working as a surgical nurse, Jack moved to Springfield to attend St. John’s School of Nurse Anesthesiology, and after graduation he took a job at St. John’s Hospital.

A college degree still seemed impossible, though, because most schools at the time gave no credit for nursing school. Then Jack learned that the University of St. Francis in Joliet was offering a program for nurses in Springfield to complete their college degree, and the school gave credit for past training. He jumped at the opportunity.

“You should have seen us at graduation,” he says. “There were about 46 of us, all older, but we had the gowns, hoods, caps … just like the others. You never saw so much excitement. It was beautiful.”

Given the obstacles he had to overcome for his own education, Jack has been happy to help UIS students achieve their dreams. His first gift was a charitable gift annuity, and then he established an endowed scholarship fund. The gift annuity significantly increased his income and also lowered his income-tax bill because of the deduction he received. The endowment is helping students currently.

Both gifts support students in the music program at UIS. Through his gifts, he wants to enable students who are pursuing a profession in music to learn, study and practice without having to work as many extra hours to afford their education as he did.

Jack knows none of it might have happened without his sister’s encouragement, and he cherishes the opportunity to pass that on to others. “I had help getting my education,” he says. “It makes me feel good to have this opportunity to help.”