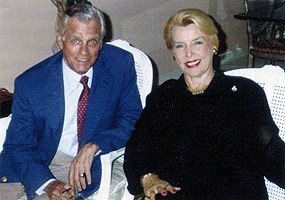 Barbara F. and George J. Williams recently made a major six-figure gift using a charitable gift annuity. They had done so previously in support of St. Jude Children’s Research Hospital and Sloan-Kettering Cancer Center and were thus familiar with the benefits garnered from a charitable gift annuity. “When you consider the tax savings along with the increased income we receive, gift annuities make good financial sense, while still helping organizations important to Barbara and me,” George states.

George Williams (’51) served his country proudly in World War II. He was part of General Douglas MacArthur’s staff in the Pacific theater where he helped set up Japan’s provisional government after the Allies’ victory. Upon returning from the war, he was able to pursue his degree in architectural engineering on the GI bill. “I chose to attend Illinois because of the quality and reputation of the architecture program,” he remembers.

Having graduated with a degree in architectural engineering, Williams then embarked on what turned out to be a very successful and gratifying career in commercial design, the highlight of which was the founding of his own international design firm. “The education I received prepared me very well—the instructors were first-rate,” he recalls.

When he left his employer to venture out on his own in 1962, he took one very valuable asset with him…his wife Barbara. The two had met early in their careers at the “design build” firm of Wigton & Abbott. “We met in 1952 at the water fountain…I remember it very well,” Barbara says. “I could tell by the way George looked at me that he was going to ask me out, which was just fine with me,” she adds. They married two years later in 1954. As they reminisce about their years working together, George remarks with a smile, “I would have fired myself before her.” The couple sold the firm in 1990 after operating it for more than 30 years in Plainfield, New Jersey.

Thoroughly enjoying the fruits of their labor, today the Williams split their time between Vero Beach, Florida, and Warren, New Jersey. Most of their time is spent golfing, traveling, reading, and enjoying the company of friends and family, including Chelsea, their 20-year-old Siamese cat. In May of this year, the Williams also celebrated their 50th wedding anniversary.

The generosity of the Williams will live on in perpetuity through the establishment of the Barbara F. and George J. Williams Endowment for Architecture with the amount remaining from the gift annuity after they are gone. The School of Architecture will receive the income from the endowment each year thereafter to enhance and promote the excellence of academic programs for future generations. The School of Architecture, and indeed the entire University, is deeply grateful for the generosity of these special friends.