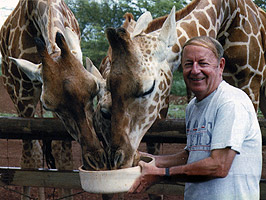 James R. Beck, Ph.D. (’61), is quite familiar with excellence in education, having achieved as much over the course of his own academic career. He was born in 1931 in Paris, Ill., and was raised from the age of 10 in nearby Terre Haute, Ind. Upon graduation from high school in Terre Haute, he packed his bags for Purdue University, where he spent two and a half years before joining the army in 1953 to serve his country in the Korean War effort.

When he was discharged from the army in 1956, he was intent on continuing his education and being the first in his family to graduate from college. “I wanted to study chemistry, and at that time UC-Berkeley was the top-rated undergraduate program in the country… so that’s where I went,” he says. Beck’s academic achievement at Berkeley was outstanding; he graduated with highest honors and Phi Beta Kappa.

Upon graduation he went, degree in hand, looking for work and feeling pretty good about his prospects. “I was probably a bit naïve in my belief that an undergraduate degree in chemistry would position me to accomplish my career goals,” Beck states. Upon seeking guidance from one of his professors at Berkeley, he determined that he would be wise to continue his education.

Reflecting on his decision to go to Illinois, Beck recalls, “This time everyone told me that the best graduate program in chemistry was at Illinois, so, once again, that’s where I went.” As a result of his undergraduate performance at Berkeley, he was offered a Roger Adams Fellowship. This award was reserved for the top incoming students and allowed them to begin their research in the first year of graduate studies.

Beck received his Ph.D. in 1961 under the supervision of Professor Kenneth Rinehart. As a result of his outstanding academic credentials, he was then selected to receive a coveted National Science Foundation Fellowship for study at the Swiss Federal Institute (ETH) in Zurich, Switzerland. There, he assisted in the research of Professor Vlado Prelog, who in 1975 won the Nobel Prize in Chemistry.

All of this outstanding training and education prepared Beck well for a long and successful career with Eli Lilly in Indianapolis, where he resides today. He spent 27 years with Lilly, retiring in 1988 from his position as a research advisor. During his distinguished career, he was the inventor of 48 U.S. patents and authored 35 scientific publications.

Today Beck enjoys traveling, genealogy, and collecting Inuit carvings and signed Colonial documents. His research curiosity is still strong, as witnessed by the fact that most of his trips involve exploring nature. His favorite subjects are plants, animals, geology, and anthropology, with perhaps his favorite being Mayan archeology. “A description of my interests wouldn’t be complete without mention of the fact that I’m a lifelong Cub fan,” he adds.

Fully realizing the value of quality education as well as the value of private support, having been the recipient of such support himself, Beck recently pledged lifetime annual gifts that will fund the James. R. Beck Fellowships in chemistry and microbiology. He is also endowing the fellowships through his estate plan, which resulted in the fellowships qualifying for the Urbana-Champaign “fellowship matching program,” which doubles the impact of his gift. “The education I received from Illinois was crucial to the rest of my career and the things I was able to accomplish and do in my life. It’s important to me that others have the same opportunities I had, so this is my way of giving back,” Beck concludes.

Giving back, indeed! Jim Beck’s generosity will total in the seven figures and is already having a tremendous impact on the chemistry and microbiology programs, as well as the individual students he is supporting. He can rest assured, too, that his gift will “keep on giving” beyond his lifetime with the establishment of the James R. Beck Endowment. Dr. Beck is a very special friend, and the University of Illinois is deeply grateful for his outstanding investment in continued excellence.