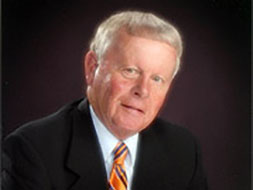 Following the advice of Horatio Alger, Tom Hubbard, a 1956 University of Illinois architectural studies graduate, went west. He took 45 years to return to his alma mater, but in the meantime has made a commitment to ensure that architecture education on the Urbana-Champaign campus remains one of the best in the nation.

A native of tiny Elwood, Indiana, and now living in Arizona, the retired architect has made two significant deferred gifts; a series of charitable lead trusts that will eventually generously provide for his grandchildren, and an individual retirement account. The IRA was going to be severely taxed at his death, but leaving it to his alma mater avoids all taxation. Both gift commitments will support the Thomas D. Hubbard Architecture Endowment Fund. “I really have a soft spot in my heart for Illinois,” said Hubbard.

He smiles when he reflects on the technological advancements made since his college days. “I was doing all my work with a slide rule. You can’t even buy a slide rule today.”

After earning his bachelor’s degree, he volunteered for the army and completed a two-year stint, mostly in Germany. Returning home to Indiana, he worked for a short while at an architectural firm in Anderson before packing the Volkswagen Beetle he bought in Germany and heading to California.

For the next three-plus decades, he plied his skill as an architectural specifications writer. He worked for the firm of Corwin Booth in the San Francisco Bay area. Booth, a U of I architectural graduate, told Hubbard that the U of I was a fertile training ground for architects, and he did his best to hire graduates when he found them.

Hubbard soon established his own firm and for many years was an architectural consultant providing specifications for other architectural firms. He retired in 1992 and left the congested San Francisco area for Arizona, living first in Tucson and later in Peoria, near Phoenix.

Last year, Tom Hubbard returned to the U of I for the first time in 45 years. The changes, he said were “enormous, and for the better.” During his visit, he walked the main corridor of the University Library, seeing for the first time his name on a wall as a Bronze Tablet Scholar.

Having accumulated significant wealth, Hubbard decided it would be wise to do some estate planning. His grandchildren, he concluded, should benefit from his estate, but only when they reached maturity. His plans were solidified through the efforts of the University of Illinois Foundation’s Office of Trust Relations and Planned Giving. After much discussion, his planned giving advisor came up with a plan that addressed his objectives, and then steered him through the entire process, even helping to secure an attorney near his home to do the legal work. The lead trust “seemed to be created for me…it was perfect,” Hubbard said, referring to the fact that the lead trust pays income to the U of I for a period of time, beginning at his death, and then distributes its principal as an inheritance to his grandchildren sometime later. “Having this all take place after I’m gone was ideal, as well, because I really didn’t want to do anything I couldn’t change during my lifetime, if I needed to.”

The plan involves four lead trusts that are established at Hubbard’s death for each grandchild then living. The U of I Foundation will serve as trustee, which simplifies the matters tremendously. Equally important as providing a gift for his grandchildren was providing it at a time “when they’re mature enough to handle it wisely,” said Hubbard. To address his concern, the first lead trust will provide an inheritance to each grandchild at the age of 35, the second at 40, third at 45, and finally each grandchild will receive the assets of their fourth lead trust at the age of 50.

Between the time of his death and the grandchildren reaching these ages, the four lead trusts will be paying 5%, 4%, 3%, and 2% income, respectively, to the Foundation. It is estimated that the income will be paid to the U of I for 15 to 30 years, based on Hubbard’s current life expectancy and the current age of his only granddaughter, who is 2. “My granddaughter will probably be about 20 when I die, so the delay between my death and the date she receives her inheritances made perfect sense to me. Providing some of the trust earnings to the U of I along the way, not to mention the estate-tax benefits, made this particular plan almost too good to be true,” he concludes.