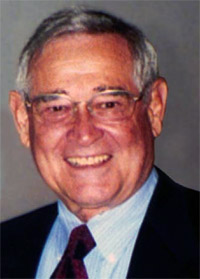 Ron Rigoni ’56 knows what it takes to be a winner. As a standout three-sport athlete in high school at Danville, Ill., he experienced uncommon success on and off the field or court, depending on which sport he was playing. He was a member of the 1950 boys basketball team that was runner-up in the state championship and was a unanimous first-team all-state pick his senior year.

It was his academic achievement, however, that earned him an appointment to the United States Military Academy at West Point, where he continued his football career until receiving a career-ending shoulder injury his freshman year. Notably, one of Rigoni’s teammates at West Point was retired General Norman Schwarzkopf and the assistant coach at the time was none other than Vince Lombardi of Green Bay Packers fame.

Rigoni left the academy in 1953 and enrolled at the U of I to study management in the College of Business. Upon receiving his degree, he pursued a career in sales and marketing that led to jobs with Dow Corning, Sunbeam Corp., and Alcan Aluminum in Florida, which is still his home today. He achieved much success in his career and gives a lot of the credit to his U of I education. "Although there are many worthy causes in the realm of charitable giving, supporting higher education might very well be difficult to top," says Rigoni.

Rigoni’s financial prowess came in handy as he structured his charitable giving to save taxes and increase his income. He has made two separate gifts totaling in the upper six figures that will support the College of Business and scholarships for U of I students who hail from his hometown of Danville.

In the first case, he donated highly appreciated stock that didn’t pay much of a dividend. Being extremely stock market savvy, he was also concerned with the future prospects of this stock, which represented a large portion of his portfolio. "Being able to diversify my stock position without a capital-gain tax and get an immediate income-tax deduction with lifetime income that tripled the dividends I was receiving made the gift annuity awfully attractive," he remarks.

His second gift provided similar financial benefits and allowed him to dispose of a rental property that had become burdensome to maintain. "These life-income arrangements are compelling to those of us who feel a debt of gratitude for the role Illinois played in the success we were able to achieve," Rigoni concludes.

Ron Rigoni has led an exceptional life and is now giving back to his alma mater in an exceptional manner. The University of Illinois is deeply grateful for the generosity of this special friend who understands the value of an Illinois education.