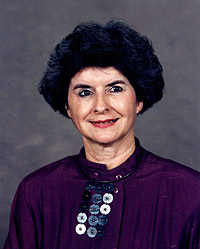 MARLYN RINEHART, in memory of her husband, noted University of Illinois researcher and chemistry Professor Kenneth L. Rinehart, has established an endowed chair in the Department of Chemistry.

Professor Rinehart earned a bachelor’s degree in chemistry in 1950 from Yale University and a doctorate in chemistry in 1954 from the University of California at Berkeley. He came to the U of I in 1954 as an instructor in organic chemistry. "Chemistry at Illinois was such a strong, dominant department that the opportunity was not something he would turn down, even though it was just a temporary appointment," said Mrs. Rinehart.

The two met because Mrs. Rinehart, who was an English graduate student and teaching assistant at that time, taught rhetoric in Noyes Lab. Dr. Rinehart introduced himself one day while passing by her classroom. They were married in 1961 and had three sons, Ken III, Ben and Nick. "He was motivated by the quest for knowledge and the serendipity of new discoveries. He always thought it was such an adventure to find new things," said Mrs. Rinehart. Even before Dr. Rinehart joined the U of I faculty, Nelson Leonard, R.C. Fuson Professor Emeritus of Chemistry and Biochemistry, remembers hearing about Dr. Rinehart, who was then at UC Berkeley. "Everyone liked him," says Leonard. "Ken had lots of energy that showed in everything, even the way he bounded up the stairs. His techniques and methodology were outstanding. I still remember the chromatography column he and his students created that went down the entire stairwell, from the top of Noyes to the firstfloor. And he did spectacular work with ferrocenes."

Much of Dr. Rinehart’s early work focused on antibiotic research. He developed a procedure involving mutasynthesis to prepare new antibiotics. Dr. Rinehart loved to travel. His first sabbatical he spent as a visiting professor in Zürich, Switzerland, and in Stockholm, Sweden. In Sweden he learned more about the technique of mass spectrometry. He brought this technique and instrumentation back to the U of I, which played an important role in his research and for the chemistry department as a whole. Dr. Rinehart spearheaded fundraising efforts to buy and operate the mass spectrometry laboratory. "We are grateful to him for having introduced these methods and instrumentation to the department and guiding how it developed. It was a tremendous service for the department," said Leonard.

Dr. Rinehart took up scuba diving in 1970 in order to gather sea specimens to advance his research in the largely untapped realm of marine chemistry. His early expeditions took him and several students to Baja California, Mexico, where they traveled in an orange GM van outfitted specifically for these collecting trips. Later he and Lowell Hager, a colleague in biochemistry, together with several students and other colleagues mounted an expedition on the Alpha Helix, a vessel operated by the National Science Foundation. Although at first Dr. Rinehart collected indiscriminately, he soon focused on tunicates, or sea squirts, from which he isolated several compounds that are active as anti-cancer agents. One of the compounds, ecteinasciden, is in Phase III clinical trials and has been shown effective against soft-tissue sarcomas and against lung, breast and ovarian cancers.

Dr. Rinehart was a fellow of the American Association for the Advancement of Science, a Sloan Fellow, and a Guggenheim Fellow. He received the Ernest Guenther Award in the Chemistry of Natural Products from the American Chemical Society and served on the editorial boards of several journals. He and his wife have supported an array of activities at the U of I over the years, from the Krannert Center of the Performing Arts and the University Library to various funds in the Department of Chemistry and College of Liberal Arts and Sciences. Mrs. Rinehart’s $2 million commitment to chemistry for the chair includes six-figure annual gifts until the endowment is fully funded or is provided for through her estate. The Rinehart Chair, the second major chair endowed chair in the department, is expected to have a profound influence.

"To be competitive with the Ivy League and the coastal schools, we absolutely need chairs and professorships," said Steve Zimmerman, interim head of the Department of Chemistry. "It recognizes our very best faculty and provides them with unrestricted resources to try new ideas, things they wouldn’t otherwise be able to get money for."