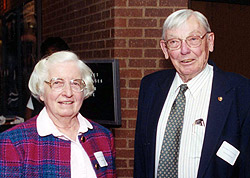 Ann Pearson, a retired Springfield physician, knows something about contributing to her community. For many years, even without pay and sometimes going in debt because of it, she provided health care to welfare recipients.

"It was tough on our finances," her husband Ray Pearson, also a physician, has said; but even when it meant taking out personal loans to meet payroll expenses, Ann continued to serve her patients. Not surprisingly, the Pearsons' life together was described as one of "unremitting service."

In 1996, the couple made an investment in the work of UIS by establishing a charitable gift annuity (CGA). The high payment rate, immediate income-tax savings, and the fact that a large portion of their payment would be tax-free made the decision to do so quite simple.

The quarterly payments were set up to be deposited directly into their bank account, which streamlined the entire arrangement. In fact, it was so simple and worked so well that they decided to establish a second CGA three years later in 1999.

Today, both of these CGAs are still providing Ann an average of 7.45 percent income each and every year, which will continue for the rest of her lifetime.

Additionally, in 2000—prior to Ray's passing in 2006—the couple set up a ten-year, $1 million charitable lead trust with the University of Illinois Foundation. Part of the trust income will provide current scholarships, and a portion will go into an endowment to continue the scholarships in perpetuity after the ten-year term expires. The principal of the trust will go to the Pearsons' children and grandchildren at the end of the trust term.

Ann Pearson, whose own undergraduate degree at the University of Chicago was paid for by a full scholarship, has said she wants to be remembered as a good doctor who loved kids. For the many students who have been able to attend UIS because of her and her husband's generosity, she will no doubt also be remembered as a doctor who loved giving students a chance for an excellent college education.