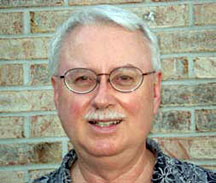 My experience at the U of I was quite special. The courses were excellent, and beyond that, the ability to participate in such a significant research project as Illiac IV was truly a once-in-a-lifetime opportunity. The group of graduate students and professors who comprised that group were top-notch in every respect. It is truly rare to be able to work in such an atmosphere.

Beyond computing, the U of I also offered numerous cultural opportunities. I have been a lifelong lover of classical music and took advantage of what the School of Music had to offer while I was on campus. Naturally, I became familiar with the U of I's public radio station, WILL, and have continued as a listener and supporter ever since.

Which brings me to the charitable gift annuity (CGA). I had two gifts written into my will for several years. One was for WILL and the other for a memorial fund in the name of Dan Slotnick, the principal investigator for the Illiac IV project. Recently, I was reminded of the U of I Foundation's CGA and realized it is an ideal vehicle for these gifts.

Using the CGA will allow us to lower our tax bill this year with the immediate deduction we received. Given the uncertainty of estate-tax laws, there may not have been any tax savings had we waited until we are gone. Also, over 60% of the guaranteed lifetime income we receive is going to be tax-free. This is a tremendous benefit over other income-producing options we might have chosen.

Perhaps the U of I played a significant role in your life, like it did mine, and you've considered providing support; or maybe the University is already part of your estate plans. If so, I urge you to contact the Foundation's Office of Gift Planning to see how you might benefit from a CGA or to let them know about your plans to provide support through your estate. Either way, your current support or future gift can be included in the Brilliant Futures campaign, which will help ensure its success!

When Dave Grothe entered the University of Illinois as a James Scholar in the fall of 1964, he intended to study mathematics. However, spring semester of 1966 he enrolled in Math 195, which turned out to be a computer programming course, and he was hooked for life.

Dave was soon hired, with a handful of others, to work with principal investigators Dan Slotnick and Dave Kuck on the project to design and build the Illiac IV supercomputer. Slotnick calculated at the time that, if Illiac IV could have been built and deployed right then, the world's computing power would have doubled immediately. Of course, it took years to design and build, and along the way, the scale had to be reduced from 256 processors to 64—just to fit into a halfway reasonably sized computer room.

Ultimately, Professor Slotnick chose not to have the machine delivered to the U of I, and it was installed at NASA Ames Navel Air Base in California. The U of I was to have remote access via a new computer network that the Defense Department's Advanced Research Projects Agency (ARPA) was building. This network, ARPA-Net, was the predecessor of today's Internet.

Dave, then a graduate student in computer sciences, participated in building the U of I's access computer system for the ARPA-Net and gained a good grounding in network protocols, operating systems and compiler construction. Later he would put these skills to work in his company, Gcom, Inc., founded in 1979. Gcom continues today, offering various implementations of computer networking protocols from its headquarters in Savoy, Ill.