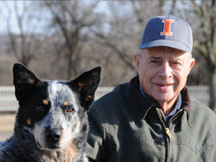 To some, Lou Mund may seem an unlikely philanthropist. His modest upbringing and the fact that he started working when he was a young boy have resulted in a genuine warmth and down-to-earth personal style. The truth is, he has achieved more success than he could have ever imagined growing up just across the river from St. Louis in Dupo, Ill., and he thoroughly enjoys sharing the fruits of his labor.

“For as long as I can remember I’ve worked 18 hours a day, seven days a week,” Lou says. His first job was at nine years old, when he and his sister, Jeanne, helped a local farmer tend a 100-acre tomato plot. He also discovered early on that he had natural mechanical abilities and put them to use repairing tanks in Germany for Uncle Sam and then operating his own automobile and equipment repair service in Dupo for over 30 years. His skill and honesty were well known, and the business thrived as a result. Over the years, Lou also accumulated significant real estate holdings.

It became clear to Lou recently that he needed to carefully consider his legacy, especially since he has no children. “I have a great opportunity to make a difference in the lives of others, and doing something good with what I’ve accumulated is important to me,” he states.

After careful consideration and planning, Lou’s estate will be divided equally between Cardinal Glennon Children’s Hospital, Shriners Hospital for Children, Bradley University, the NRA and the University of Illinois Foundation. The gift to Bradley is in honor of his sister, Jeanne Mund-Lagowski. She excelled academically and graduated from Bradley in Peoria, Ill., and obtained a Ph.D. in chemistry from Michigan in 1957. In 1959, Dr. Lagowski joined the faculty of the University of Texas at Austin and was there until she retired in 2006.

Part of Lou’s U of I legacy will fund the Louis I. Mund Endowment for Veterinary Medicine, which will support cattle research. His vets, U of I alums and husband-wife team Drs. Liz Vollmer and Dwight Boehm, had a lot to do with that. The other part of his estate gift will establish the Louis I. Mund Endowment for Archeology, which will support field studies in Illinois. Land that Lou owns in the Mississippi River flood plain was used by U of I researchers and a book of their significant findings was published, called The Mund Site.

“Liz and Dwight and all the others I’ve come to know from the U of I, are good people. It’s a great university and I feel very good about establishing a legacy there. I want to encourage everyone to consider what’s been important in your life and then take steps to do something good for others,” asserts Lou.

Lou Mund is a very special friend of the U of I, and his investment in the future of veterinary medicine and archeology is deeply appreciated by all who will be touched by his generosity.