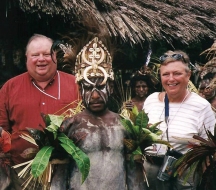 During their 53-year marriage, University of Illinois at Springfield donors Lynda and the late Howard Humphrey visited every continent, more than 100 countries and every state in the United States, often taking their children and grandchildren with them. Along the way, the family learned adaptability, respect for other cultures, appreciation for the variety and drama that the world offers and so much more.

From Japan to Antarctica, Italy to China and New Guinea to England, the Humphrey family gained much from their many journeys over the years. "What's so wonderful about travel," said daughter Cathy Humphrey Padget, "is that you learn about other people and cultures."

Lynda adds, "Don't tell them your traditions; learn theirs. Learn a little of the people's language, like 'please,' 'thank you,' 'good morning' and 'excuse me.' Learn at least a little of their culture before you go. And, most of all, go with the flow."

Now, through the Howard C. Humphrey Global Education Fund, which was created with a bequest when Howard passed away, the family hopes to pass that learning opportunity on to UIS students. To that end, the fund will encourage UIS students to participate in the study abroad program by providing financial assistance to those who want to experience education in another culture or country. The couple also has two other endowed funds at UIS that provide scholarships for six students each year. One of the funds is named in memory of their late daughter Lee.

Lynda and Howard have been longtime and generous benefactors to the U of I and have supported educational programs in finance and business, WILL-AM-FM-TV and the Fighting Illini at the Urbana-Champaign campus, in addition to their support for UIS.

After they both graduated from the University of Illinois at Urbana-Champaign in 1959, Howard joined the Franklin Life Insurance Company in Springfield. He spent his entire career there and retired in 1996 as chairman of the board.

As a member of the U of I Foundation Board of Directors, Howard founded the UIS Development Advisory Board and served as co-director of UIS's Brilliant Futures Campaign; and in 2002, the University of Illinois Alumni Association recognized him with the well-deserved Distinguished Service Award.

Lynda and Howard Humphrey, two of UIS's most generous supporters, have ensured that their values and belief in education will live on at UIS.