A Legacy of Excellence 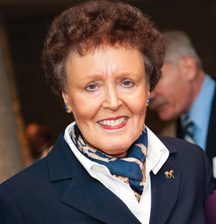 When Cheryl Peck ’86, ’88 M.A. LAS, walked into her first class with Professor Judith Everson in the 1980s, she had no idea how powerfully Everson would affect her life and her learning.

Peck had enrolled at Sangamon State University (now UIS), unsure whether to major in communication or English. Everson’s class on “Literature Between the Wars” settled the issue: Peck majored in English, continuing for a master’s degree in 1988 and eventually serving as director of public relations at UIS from 1992 to 2009.

Peck describes Everson as an “engaging tour guide” who introduced her to the aristocratic worlds of Wharton and James and made accessible Faulkner’s stream-of-consciousness narration, Hemingway’s spare writing style and Dreiser’s literary naturalism.

“Her devotion to her students inspired us to reach beyond our fears as midlife learners and to ask more of ourselves than we had ever thought possible,” says Peck.

“The result was a newfound confidence that swept me on to further literary exploration and set me on a path of lifelong discovery in books and writing.”

In 2010, through a bequest, Peck endowed the Judith E. Everson Professorship in English. The distinguished professorship will serve as a tribute to Professor Everson’s extraordinary gift for teaching that opened up new worlds of possibility and accomplishment for so many students.

“I am one of those fortunate students who caught her passion for literature,” Peck says.

In response to the gift, Everson said, “We’re often told that when the student is ready, the teacher appears. This was certainly the case many years ago when Cheryl Peck and I had our first meeting of the minds here on campus. If, as she kindly says, I helped to make her a better student, I can return the favor and say that she made me a better professor, which is what superior students always do for their teachers.”

Everson retired in 2001 after teaching courses in English, history and public speaking but still remains active in the UIS community. As a charter faculty member, she came to Springfield in 1970 when the University was still under construction.

“It is my sincere hope that future students of English will be similarly inspired by the faculty who occupy the Everson Professorship in years to come,” says Peck.

Everson, who says she is thrilled and honored, recognizes the legacy of excellence Peck has created for UIS. “Through this farsighted gesture, Cheryl is making sure that there will be continued vitality in the English Department and on the campus that we both cherish.”